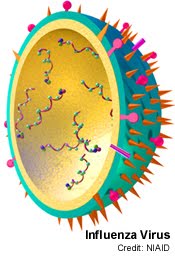 The NIH study of the newest H1N1 investigational flu vaccine has confirmed–in spades–the positive results of an earlier industry study. It looks like recipients of the new flu vaccine will have a significant immune response in just 8 to 10 days after injection. And happily this new approach requires only one shot, instead of a shot-plus-booster combination.

They should be starting to offer the vaccine to Americans in mid-October. Best part is, it works really well with those 18-64 (where the biggest vulnerability to this flu is–especially pregnant women), and no side effects except it hurts where you get the shot.

Since I have been so deeply mired in other projects for the past couple of months, I didn’t realize they were still expecting a pandemic flu attack. And though they’re saying “a long and busy flu season,” it looks like fears have abated about not enough flu vaccine and not enough oomph to the antiviral drugs that exist.