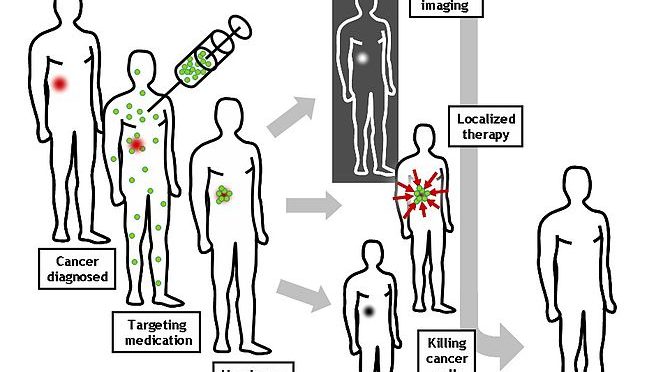 One of the biggest promises of nanomedicine is that doctors will be able to deliver needed medications directly to a site within your body without negatively affecting other tissues. That’s still a moving target, though.

One of the most challenging obstacles is the density and opaqueness of human tissue such as blood vessel walls and organs. A recent study reported in ACS nano (American Chemical Society Nano) has revealed a way to more accurately track where nanoparticles go once inside the body by allowing visibility a little deeper into living tissue. A gel, injected into tissues removed from mice, linked all the molecules of the tissue together except for lipids – the substances responsible for making tissue opaque. Lipids washed easily away and “left the tissues clear but otherwise intact.”

Lest you picture a big chunk of clear material, the actual depth to which researchers could image nanoparticles was only 1 millimeter, but that’s 25 times deeper than with existing methods. The hope is that in addition to helping track nanoparticles, this approach will assist researchers with tissue engineering, implant and biosensor applications.

Slowly, we peel away one tiny layer at a time from the mysteries of nature.

The first item is about nitric oxide (NO) used in testing, and the rest are all about using nanoparticles for delivering things into the human body, including NO. It’s astounding that scientists have found nanotechnology so helpful in these kinds of applications. I just hope more research is done on how safe it is to inject nanomaterials into our bodies or make us breathe them in. Their size is so similar to the deadly asbestos fibers that are currently costing billions in lawsuits by workers whose companies didn’t protect them from breathing and ingesting them.

Gotta make sure the cure doesn’t damage the patient in different ways than the condition it’s meant to help.

I’ve been worrying about potential danger from these guys ever since I first heard about them. Now comes some research indicating strongly that nanoparticles/nanofibers could be deadly to humans who are exposed to them. This particular research shows that it may be the length of the fibers that’s critical to whether they might eventually induce disease.

Some scientists set up the experiment with five types of silver nanofibers of various lengths and exposed mice to them. The mice developed inflammation in the pleura (the lining of the lungs) when exposed to fibers of a certain length—4 µm to be precise (that’s 4 millionths of a micron). We are talking tiny.

Since the pleura is exactly the same part of the body that is attacked when asbestos is breathed or ingested, researchers concluded their research could be relevant for colleagues investigating malignant pleural mesothelioma (MPM), a deadly and aggressive type of lung cancer. Mesothelioma, as yet incurable, is the subject of lawsuits across the US and around the world because so many corporations either negligently or deliberately concealed from workers the dangers of inhaling or ingesting asbestos.

Asbestos was and is (in third world countries where it is still being widely used without regard for its danger to humans) a highly profitable substance. Its fire-retardant and heat-resistant properties, as well as its ability to be flexible and to strengthen other substances have made it much sought-after for hundreds of years. Profits grew even as those who worked with it were being sickened because of inadequate protections. And the long latency period before asbestos diseases manifest has helped camouflage the disregard for human safety—people may develop mesothelioma cancer as late as 10, 20, 30 or even 50 years after being exposed to asbestos. Who was going to connect a lung disease in a 60-something-year-old with what he did for a living 30 years ago?

This new research is the first solid evidence I’ve seen that nanofibers may hold the same type of danger to human health and life as asbestos. And heaven knows, nanotechnology is looking to be even more profitable than asbestos. The permutations of products made better, stronger, more flexible—almost more anything you want—with nanotechnology seem almost limitless. As may also be the greed of those who stand to make enormous financial gains from its use.