A recent Google alert served up links to articles on several new developments in progress in the world of stem cell research. In addition to discussion of funding for using stem cells to grow “clean meat,”  recent work Happily, there seems to be no end to the number of areas in which humankind will at least seek solutions, if not actually develop workable applications, using this magical tool straight from nature.

Healing with stem cells (Abilene Recorder Chronicle). …”stem cell therapy ‘pennies on the dollar’ when it comes to treatment. ‘Healing is the returning the individual into function and Trinity’s research is focused … ‘Stem cells are light switches to the inflammatory process.

How men continually produce sperm — and how that discovery could help treat infertility (Science Daily). “This advance, the researchers write, opens the possibility that spermatogonial stem cell transplants could be developed to treat male infertility,..”

Kidneys grown in rats could pave way for human transplant options (The Japan Times). The research, published Wednesday in the Nature Communications journal, … The researchers found that the mice stem cells produced apparently

Osteomyelitis is a debilitating bone infection that can result when MRSA invades bone tissue following surgery. Now a team of scientists at University of Missouri led by Elizabeth Loboa, Dean of UM’s College of Engineering, has created silver-coated scaffolds that are seeded with fat-derived stem cells that can be triggered to create bone. The silver ions stave off MRSA while generating new bone.

Take a look at the video describing this revolutionary study here. More about this exciting discovery can be found at the University of Missouri website here.

Imagine: the end of antibiotics in sight. Here’s more from a brilliant TED talk on healing with a cell instead of a pill.

The news is full of stories about stem cells performing near-miraculous healings – miraculous in that they take advantage of the body’s own powerful abilities to heal itself.  Now here’s another amazing development: technology for isolating and spraying a mist of one’s own stem cells onto burns – even second-degree burns – to heal them quickly and with little or no scarring.

A German company called RenovaCare (www.renovacareinc.com) has patented and is further developing its so-called CellMist™ and SkinGun™ technologies  The  company estimates the possible market for this technology at more than $45 billion, which includes a broad range of potential applications for conditions such as burns, chronic wounds, and skin disorders like vitiligo as well as for various cosmetic applications.
Learn more about this unique biotechnology in this behind-the-scenes video of the technology and before-and-after images of a patient’s recovery. The stem cell good news just keeps coming.

Our bodies are born with X number of neurons, which are the parts of the nervous system that carry chemical and electrical messages between the brain and other body parts. Up until now, no one has found neurons reproducing like regular cells do.

Now scientists have found a way to manipulate an RNA molecule called Pnky in such a way that neural stem cells will actually produce new neurons. It’s a complex process that takes a lot of explaining, so read more at BioScienceTechnology.com. And while you’re at it, read some clear layperson’s explanations about the many functions neurons perform in our bodies and brains on Psychology.About.com.

They’ve only done this in mice so far. But it’s clear this discovery constitutes a breakthrough in understanding a whole set of long, non-coding RNA molecules that researchers have heretofore assumed were just there–with no known function. One scientist called these the “dark matter” of the human genome, meaning there’s a lot more of this stuff than there is of the DNA we’ve already explored and named.

Another whole new world of knowledge is just beginning to crack open.

A small study recently showed that multiple sclerosis patients who received injections of stem cells taken from their own bone marrow had 80% fewer areas of brain damage over the next few years than those who were given the usual immune-system-suppressing drug, mitoxantrone. Researchers feel the study indicates that stem cell treatment may actually re-set the immune system and thus may profoundly influence progress of the disease. Results of the limited study–only 21 patients–were published in a recent online issue of Neurology.

Considered the most common disabling neurologic disease of young people, MS afflicts approximately a quarter of a million Americans. The symptoms of MS result from recurrent attacks of inflammation in the central nervous system. The disease is typically characterized by progressive loss of motor control and often leads to paralysis and is considered incurable so far.

One of the toughest challenges to meeting the many exciting goals scientists have set is getting stem cells to grow into precisely the types of cells needed for the particular illness or condition. Now a researcher has discovered a way to do just that and is waiting for a patent to be granted.

This Rutgers professor Ki-Bum Lee and colleagues at Rutgers and Kyoto University in Japan have invented a platform they call NanoScript. It represents a breakthrough  in the area of gene expression. The way genes express themselves encodes information in a gene specifically to direct how a protein molecule gets assembled. That process is integral to developing tissue through stem cell therapeutics. Stem cells divide and replenish other cells, serving as an almost unlimited internal repair system.

Anything we can do to speed human knowledge along this extraordinary and exciting pathway to better healing and health is very welcome. Let’s hope – as often happens when a patent is involved – they don’t charge too much of an arm and a leg to get to the end-products. 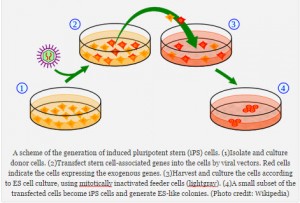 A 70-year-old Japanese woman with a debilitating eye disease (macular degeneration) has just received the first implant of stem cells created from her own cells. Called induced pluripotent stem cells (iPSCs), these can become any type of cell in the body, obviating the moral debate about embryonic stem cells and promising to help the body just as effectively to regenerate tissue – without fear of rejection.

This pilot study that will be done with six patients and include regular monitoring for a year after each procedure. Safety testing for rejection and possible tumor formation was conducted with mice and monkeys before the human pilot.