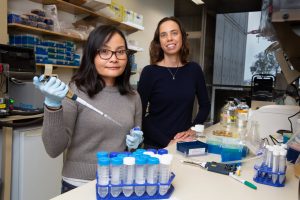 Scientists have come up with a new technique for using not just infant stem cells but also stem cells from older adults’ skin to develop treatments for many diseases. They pursued this angle because older adults’ DNA is more suitable to addressing conditions that tend to develop more frequently in older people such as diabetes, arthritis, and so on.

Good to see that the researchers have finally, after many years. found a way to create “embryonic” – meaning able to turn into any other type of human cells (plenipotent as opposed to multipotent) – stem cells without the controversial approach of taking them from discarded human embryos. Good news on all fronts.

This new approach could lead to building a genetic library of stem cells made from strong DNA. It could also be used to draw a patient’s own DNA to develop a patient-specific treatment, though this would be much more expensive than choosing from a library.

Imagine. Alleviating the pain, disability, disfigurement and suffering of diabetes. And arthritis.

For anyone facing the prospect of undergoing the current brutal approaches to joint replacement, according to research at Johns Hopkins,  the idea of using stem cells to grow new cartilage, which sounds like the proverbial miracle, may not be that far away.